Wilford Brimley, who had a recurring role on the TV show The Waltons and a regular role on Our House, and appeared in such movies as The Thing (1982) and Cocoon (1985), died on August 1 2020 at the age of 85.
Wilford Brimley was born on September 27 1934 in Salt Lake City, Utah. Mr. Brimley dropped out of school at age 14 and worked as a cowboy in Idaho, Nevada, and Arizona. During the Korean War he joined the United States Marines and served in the Aleutian Islands. After his service he worked as a ranch hand, wrangler, and blacksmith. For a short time he was a bodyguard for Howard Hughes. He started shoeing horses for both movies and television series.

Wilford Brimley appeared in bit parts in the movies True Grit (1969) and Lawman (1971) before he was cast in the recurring role of Horace Brimley on seasons 2 through 6 of The Waltons. He guest starred on the TV shows Kung Fu, The Oregon Trail, and How the West Was Won. He appeared in the mini-series The Awakening Land and the TV movie The Wild Wild West Revisited. Mr. Brimley appeared in the movies The China Syndrome (1979), The Electric Horseman (1979), Brubaker (1980), and Borderline (1980).

Wilford Brimley was known for playing gruff, rustic, older, yet congenial characters. As hard as it is to believe, he was only 51 years old when he played Ben Luckett in Cocoon, a character who was portrayed as a contemporary of characters played by Don Ameche and Hume Cronen, actors who around a quarter of a century older than Mr. Brimley. So convincing was Wilford Brimley playing older characters that many people honestly thought he was older than he really was. Of course, this is not to say that Wilford Brimley did not play other sorts of roles. He played Blair, the biologist in The Thing (1982) and President Grover Cleveland in The Wild Wild West Revisited. In most of his movies Wilford Brimley was a trustworthy, reassuring presence, which is probably why he appeared in commercials for Quaker Oats, Liberty Medical, and the American Diabetes Association. He certainly will be missed. 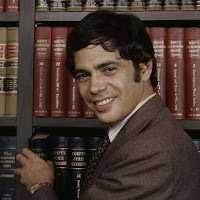 Reni Santoni, who played David Kolowitz in Carl Reiner's movie Enter Laughing (1967), Harry Callahan's partner in Dirty Harry (1971), and had recurring roles on several TV shows, died on August 1 2020 at the age of 82. The cause was complications from throat and lung cancer.

Reni Santoni was born on April 21 1938 in New York City. He began his career off-Broadway. In 1962 he wrote the play Raisin' Hell in the Son. He also appeared off-Broadway in The Mad Show, a revue based on Mad Magazine that began in 1966. He had bit parts in Strangers in the City (1962) and The Pawnbroker (1966) before playing the lead in Enter Laughing  (1967). For the remainder of the Sixties he appeared in such films as A Great Big Thing (1968), Lo sbarco di Anzio (1968), Guns of the Magnificent Seven (1969), and The Student Nurses (1970). He guest starred on the TV shows East Side/West Side; The Trials of O'Brien; Look Up and Live; Hawk; and Love, American Style.

In the Seventies Reni Santoni had a recurring role on the TV show Owen Marshall, Counsellor at Law. He guest starred on such shows as The Odd Couple, The Bold Ones: The Senator; The Psychiatrist; Bearcats!, The F.B.I., Barnaby Jones, The Rookies, Jigsaw John, Delvecchio, Lou Grant, Hawaii Five-O, The Rockford Files, and Charlie's Angels. He appeared in the movies Dirty Harry (1971), I Never Promised You a Rose Garden (1977), and They Went That-A-Way & That-A-Way (1978).

In the Eighties Reni Santoni was a regular on the TV show Manimal. He played the lead role on the short lived show Sanchez of Bel Air. He had a recurring role on Midnight Caller. He guest starred on the shows CHiPs, Lottery!, Scarecrow and Mrs. King, 227, Hardcastle and McCormick, Joe Bash, Hill Street Blues, Moonlighting, Miami Vice, Murphy Brown, Life Goes On, and Equal Justice. He appeared in the movies Dead Men Don't Wear Plaid (1982), Bad Boys (1983), Brewster's Millions (1985), Radioactive Dreams (1985), Summer Rental (1985), Cobra (1986), The Pick-Up Artist (1987), and The Package (1989).

In the Nineties Mr. Santoni had a recurring role on the TV series Murder One and Seinfeld. He guest starred on the shows Quantum Leap; Dream On; The New WKRP in Cincinnati; Murder, She Wrote; Dave's World; Hudson Street; Renegade; Walker, Texas Ranger; NYPD Blue; Dangerous Minds; The Practice; The Tony Danza Show; Jesse; Love Boat: The Next Wave; and Judging Amy. He appeared in the movies Only You (1992), The Brady Bunch Movie (1995), Private Parts (1997), Can't Hardly Wait (1998), and 28 Days (2000).

Reni Santori was an incredible actor with a very wide range. He was the movie loving delivery boy and machine shop assistant in Enter Laughing. He was the right-wing, unhygienic  restaurant owner Poppie on Seinfeld. He was Dirty Harry's rookie partner Chico Gonzalez. On Sanchez of Bel Air he played clothing company owner Ricardo Sanchez. Over the course of his career Mr. Santori played everything from legal assistants to police officers to priests to medical doctors. What is more, he always gave a good performance.
Terence Towles Canote at 6:19 PM
Share