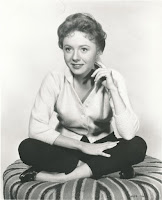 Of the cast of The Andy Griffith Show, perhaps no one was as beloved as Betty Lynn. For six years she played Barney Fife's one true love, Thelma Lou. In 1990 she started taking part in reunions of the cast of The Andy Griffith Show and various festivals devoted to the show around the country. She regularly attended Mayberry Days in Mount Airy, North Carolina. In 2007 she moved to Mount Airy, and she regularly met fans at The Andy Griffith Museum there. Of course, before she played Thelma Lou on The Andy Griffith Show, Betty Lynn had a movie career during which she appeared opposite such big names as Bette Davis, Loretta Young, Maureen O'Hara, and Myrna Loy. She also made numerous guest appearances, particularly on television Westerns. Sadly, Betty Lynn died yesterday at the age of 95 after a brief illness.

Elizabeth Ann Theresa Lynn was born on August 29 1926 in Kansas City, Missouri. Her mother was a mezzo-soprano who had performed with the Chicago Opera. Her mother and father divorced while Betty Lynn was still young, and the father figure in her life was her grandfather, George Andrew Lynn. She was only five years old when her mother enrolled her in the Kansas City Observatory of Music. As a teenager she sang in supper clubs and on radio.

It was when she was 17 years old that USO scouts discovered her in Kansas City. It was then after she turned 18 that she began performing for USO Camp Shows in the United States. As part of the USO she was one of the first to visit newly released American prisoners of war in a Calcutta hospital. During  her USO career she travelled throughout China, Burma, and India.

After her service in the USO, Betty Lynn appeared on Broadway as Sylvie in the musical Oklahoma!. It was while she appearing the pre-Broadway try-outs for the musical Park Avenue that she was spotted by a 20th Century Fox talent scout. She made her film debut as Ginger in Sitting Pretty (1948). In the late Forties she appeared in such films as Apartment for Peggy (1948), June Bride (1948), Mother is a Freshman (1949), Father Was a Fullback (1949), and Cheaper By the Dozen (1950).

In the Fifties she made her television debut in a guest appearance on Schlitz Playhouse in 1951. She had a recurring role on The Egg and I in 1952. She was a regular on the sitcom Where's Raymond?, starring Ray Bolger. She made several guest appearances on Matinee Theatre. She also guest starred on the shows Revlon Mirror Theatre, The George Burns and Gracie Allen Show, Studio 57, Fireside Theatre, Your Playtime, TV Reader's Digest, Cavalcade of America, Sally, The Gale Storm Show, M Squad, Lawman, Wagon Train, Bronco, Sugarfoot, Markham, Tales of Wells Fargo, Mike Hammer, and National Velvet. Betty Lynn appeared in the movies Payment on Demand (1951), Take Care of My Girl (1951), Many Rivers to Cross (1955), Meet Me in Las Vegas (1956), Behind the High Wall (1956), Gun for a Coward (1956), The Hangman (1959), and The Louisiana Hussy (1959).

It was in 1961, late in the first season of The Andy Griffith Show, that Betty Lynn first played Thelma Lou. Initially it was not planned for Thelma Lou to be Barney Fife's regular girlfriend, but the character proved popular. As a result Betty Lynn was brought back multiple times to play Thelma Lou until Barney and Thelma's romance was an established part of the show. At the same time that Betty Lynn was appearing as Thelma Lou on The Andy Griffith Show, she was also appearing as Viola Slaughter on a series of episodes on Walt Disney's Wonderful World of Colour devoted to Texas John Slaughter. In fact, at the time she was cast as Thelma Lou on The Andy Griffith Show, she was under contract to Disney. Later in the decade Miss Lee, Bill David's secretary on Family Affair, and Janet Dawson, Steve Douglas's secretary on My Three Sons. She also guest starred on the shows The Farmer's Daughter, The Smothers Brother's Show, and The Mod Squad.

In the Seventies Betty Lynn guest starred on the TV shows The Smith Family, The Mod Squad, Little House on the Prairie, Police Story, Gibbsville, and Barnaby Jones. In the Eighties she reprised the role of Thelma Lou in the television movie Return to Mayberry, on which Barney and Thelma Lou finally got married. She played Sarah, Ben Matlock's secretary, on four episodes of the first season of Andy Griffith's TV series Matlock. She guest starred on the TV show Shades of LA.

It is likely that Betty Lynn will always be best remembered as Thelma Lou on The Andy Griffith Show. Thelma Lou was in many ways the perfect girlfriend for the sometimes fickle Barney Fife. She was intelligent, sweet, and patient, but willing to put her foot down where Barney was concerned when she needed to (which was fairly often, in all actuality). Betty Lynn did a wonderful job of bringing Thelma Lou to life. Of course, during her career Betty Lynn played many other roles. In the movie June Bride, she played Barbara "Boo" Brinker, the younger sister in love with her older sister's fiancé.In Mother Is a Freshman, she played the daughter of the mother of the title, who enrolls in college. Of course, Betty Lynn also played Viola Slaughter, the wife of Texas John Slaughter, on the Disney series.

Of course, in may ways it should be little wonder that Betty Lynn did so well at playing Thelma Lou, as in real life Betty Lynn was known for her sweetness and kindness. She loved her fans and they loved her back. She was known for remembering fans she had met and even their names years after she had met them. Fans who met her always remarked on her kindness, her generosity, and her positivity. Bette Davis, with whom she worked on June Bride and with whom she was close friends, once advised Betty Lynn to be more selfish if she wanted to be a star. Betty Lynn proved Bette Davis wrong. Betty Lynn never became more selfish, remaining the sweet, bright woman she always was, and still became a star.