Much to the irritation of fans of Hammer Films and Amicus Productions, the two studios are sometimes confused by the uninitiated. While the movies of both studios boasted a similar visual style and shared many of the same stars, there are some notable differences between the two. Most of Hammer's horror films were set at some time in the past, whether it was the 18th Century or the Victorian Era. Most of Amicus's films were set in the present. Further setting the two apart was the fact that most of Amicus's horror movies were portmanteau films. That is, they were anthology films in which various stories were all united by a single wraparound story. The first of Amicus Productions' many portmanteau horror movies was Dr. Terror's House of Horrors (1965).

In Dr. Terror's House of Horrors architect Jim Dawson (Neil McCallum), Bill Rogers (Alan Freeman), jazz musician Biff Bailey (Roy Castle), art critic Franklyn Marsh (Christopher Lee), and Dr. Bob Carroll (Donald Sutherland) each enter a train carriage. They are joined by Dr. Schreck (Peter Cushing), whose last name translates literally into "terror" in English. Dr. Schreck is a doctor of metaphysics and he has with him a tarot deck, which he refers to as his "house of horrors." To pass the time, he does a tarot reading for each of the men in the carriage with him, these readings providing the stories in the movies. As might be expected, these are horror stories, featuring everything from a werewolf to a sentient, creeping vine.

Amicus Productions was founded in 1962 by American movie producers Milton Subotsky and Max Rosenberg. The company's first two films were the pop musicals It's Trad, Dad (1962) and Just for Fun (1963). Despite this, Milton Subotsky and Max Rosenberg were no strangers to horror. Prior to founding Amicus Productions, the two men had worked together on the horror movie The City of the Dead (1960). Furthermore, they had planned to shoot Dr. Terror's House of Horrors in black and white in 1962, with Columbia Pictures providing financial backing. Columbia decided that the movie's $94,000 price tag (low even in 1962) was too much and pulled out of the project. It took two years for Milton Subotsky and Max Rosenberg to raise the money needed to make Dr. Terror's House of Horrors, which would now be shot in glorious Technicolor.

The inspiration for Dr. Terror's House of Horrors was the classic British horror portmanteau film Dead of Night (1945). Milton Subotsky had always admired the film and thought "..the time was ripe for another film like it." The stories in Dr. Terror's House of Horrors were drawn from five half hour scripts Milton Subostsky had written for the television version of the classic radio show Lights Out in 1948. Since the stories were not used for the TV show, Milton Subostky simply recycled them for his screenplay and wrote the framing story featuring Dr. Schreck to tie them together.

Much of the source of confusion with regards to Hammer Films and Amicus Productions is that the two companies often used the same actors. Indeed, Dr. Terror's House of Horrors features Hammer's two best known stars, Peter Cushing and Christopher Lee. In the various stories it also features other veterans of Hammer Films. Harold Lang, who appears in the segment "Creeping Vine," had appeared in several Hammer movies, including Cloudburst (1951), Wings of Danger (1952), The Saint's Return (1953), The Men of Sherwood Forest (1954), The Quatermass Xperiment (1955), and Paranoiac (1963). Michael Gough, who plays Christopher Lee's nemesis in the segment "Disembodied Hand," will be familiar to Hammer fans as Arthur Holmwood in Dracula (1958) and Ambrose D'Arcy from The Phantom of the Opera (1962). While some of the members of the cast of Dr. Terror's House of Horrors had not yet appeared in a Hammer movie, they eventually would. Bernard Lee, best known as M in the James Bond movies, would appear in Frankenstein and the Monster from Hell (1974).

Dr. Terror's House of Horrors was very well received. In its March 3 1965 review, Variety wrote of the film, "Five short horror episodes, thinly linked, provide a usefully chilly package deal which offer audiences several mild shudders and quite a bit of amusement..." Robert Salmaggi of The New York Herald Tribune commented "..that each scary adventure will keep you watching, sitting on the edge of your seats one second, laughing the next (there are some deft touches of humour) and all in all, nicely entertained." Dr. Terror's House of Horrors also did very well at the box office on both sides of the Atlantic. It should be little wonder that Amicus would follow it with even more portmanteau horror movies over the years.

Indeed, Dr.Terror's House of Horrors is a very well done movie. Much of this is because of the various performances in the film. Peter Cushing is fittingly mysterious as Dr. Schreck (the "Dr. Terror" of the title). Christopher Lee is excellent in a role unlike those with which viewers are most familiar, playing a a smug art critic. Donald Sutherland excels in one of his earliest roles, playing a physician a bit of his depth. Of course, a good deal of credit must also go to Milton Subostsky's script. He deftly blends both horror and humour, so that Dr. Terror's House of Horrors is by turns frightening and funny. One of the best bits of humour is even meta in nature. In the segment "Voodoo" Roy Castle runs straight into a poster for, you guessed it, Dr. Terror's House of Horrors.

Dr. Terror's House of Horrors would set the pace for Amicus for the rest of its history. Over the years Amicus would follow it up with such portmanteau horror movies as Torture Garden (1967), The House That Dripped Blood (1971), Tales from the Crypt (1972), and Asylum (1972). And while it was the first of Amicus Productions' many horror anthologies, it also remains one of their best. 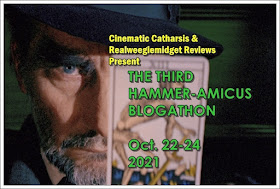